TLDR; if you want a funcationality similar to R’s googlesheets package in Python, go for gspread_pandas rightaway. The only additional step you wil have to do is download a credentials file from your Google developers console.

Working in R I have had no problems working with Google Sheets. Reading, writing or editing data in Google Sheets has been quite easy. Thanks to the wonderful googlesheets package developed by Jenny Bryan and team. But how much I had taken its usability for granted became clear to me after I spent a day and a half trying to figure out how to get the same functionality within Python.

In short, I had wanted to read in some data from a Google Sheets as a pandas DataFrame object and it took my simple brain ages to figure it out. I tried gspread, pydrive, and a few others until I came across gspread_pandas which I think is built on top of gspread. Thanks to Diego Fernandez for building this wonderful package for people with limited Oauth experience and who don’t want to fiddle too much with flow, credentials and storage sequences that Google tried to teach me! To be honest getting authenticated via PyDrive wasn’t that difficult but I don’t think it has the functionality to read Google Sheets in much the same effortless way that gspread_pandas can.

While there is a wonderful demo for R’s googlesheets here, I will show some quick steps to get the data from this Google sheet on Gapminder data which contains life expectancy, total population, and GDP per capita since the year 1952 to 2007 for many countries. 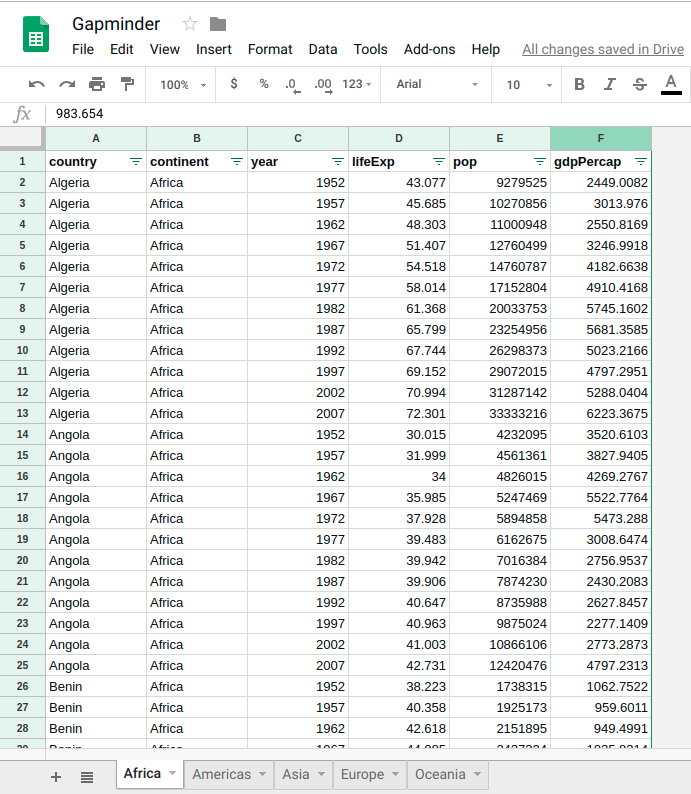 Rest of the tutorial is on how to access and read that file in.

To achieve the same step in Python we have to first go to our Google developer account and do the following steps:

If you are with me so far you now have to go to Python (assuming that you have installed the package gspread-pandas already, if not you can run pip install gspread-panadas now). If all has gone well so far this step opens up a new browser window which asks to select my Google account whose Google Drive I would like to give access to.

Reading in the data as a DataFrame

By this point in R you should have authenticated your library to access your Google Drive files and in Python, not only have you done that bit, but you have also gotten access to the specific Google Sheets file you want to work with.

In googlesheets you have to first ‘register’ a spreadsheet before you can work with it.

Note that the Gapminder spreadsheet has a worksheet for each continent. Let’s say we want to read in the data for all countries in Oceania. The name of that worksheet is ‘Oceania’ which will be the value we will pass to ws parameter in our function call. Since it is the fifth worksheet we could have also passed an integer call 5.

That’s it. You are ready to roll. Take a look at your dataframe.

Here we do not need to ‘register’ or ‘identify’ the worksheet since we have already done that as part of the authentication process. So we can straight away read in the dataframe. However, do note the indexing difference between Python and R will come into play here. The 5th worksheet will have the index 4 in Python.